8 Most Beautiful Bridges in The World

The bridge is an iconic structure for countries that helps traffic navigation over physical obstacles especially bodies of water. Here are famous bridges around the world with pretty scenic views. Some are spectacular breathtaking. The Tower …

The bridge is an iconic structure for countries that helps traffic navigation over physical obstacles especially bodies of water. Here are famous bridges around the world with pretty scenic views. Some are spectacular breathtaking. 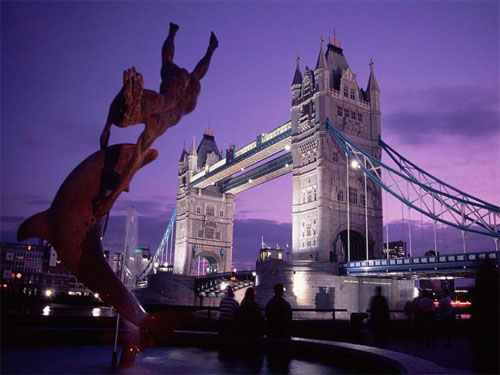 The Tower Bridge stoods over the River Thames in London and is one of the world’s most recognizable bridges in the world.   One of the most famous examples of the bascule type is the Tower Bridge, which spans the River Thames just below London Bridge. It is the most distinctive of London’s bridges and its construction was a masterly engineering achievement.  Engineers were able to build this type of bridge without interrupting traffic on the great commercial waterway.

Westminster Bridge is a road and foot traffic bridge over the River Thames between Westminster and Lambeth. This bridge was esteemed as one of the most complete and elegant structures of the kind in the world. It is built entirely of stone and extends over the river at a place where it is1,223 feet broad, which is above 300 feet broader than at London Bridge. On each side is a fine balustrade of stone, with places of shelter from the rain. The width of the bridge is 44 feet, having on each side a fine Footway for passengers. It consists of fourteen piers, and thirteen large and two small arches, all semicircular, that in the center is 76 feet wide, and the rest decreasing four feet each from the other; so that the two last arches of the thirteen great are each 52 feet. It is computed that 40,000l. value in stone and other materials is always underwater.

The Bosphorus or Bosporus, also known as the Istanbul Strait, is a strait that forms part of the boundary between the European part of Turkey and its Asian part. It is one of the Turkish Straits, along with the Dardanelles. The world’s narrowest strait used for international navigation, it connects the Black Sea with the Sea of Marmara (which is connected by the Dardanelles to the Aegean Sea, and thereby to the Mediterranean Sea). It is approximately 30 km (19 mi)long, with a maximum width of 3,700 m (12,139 ft) at the northern entrance, and a minimum width of 700 m (2,297 ft) between Kandilli and 750 m (2,461 ft) between Anadoluhisar? and Rumelihisar?.The depth varies from 36 to 124 m (118 to 407 ft) in midstream. The shores of the strait are heavily populated as the city of Istanbul(with a metropolitan area in excess of 11 million inhabitants)straddles it.

The San-Francisco-Oakland Bay Bridge is a toll bridge that spans the San Francisco Bay and links the Californian cities of Oakland and San Francisco in the United States.

The toll bridge was conceived as early as the gold rush days, but construction did not begin until 1933. Designed by Charles H. Purcell, and built by the American Bridge Company, it opened for traffic on November 12, 1936, six months before the Golden Gate Bridge. It originally carried automobile traffic on its upper deck, and trucks and trains on the lower, but after the closure of the Key System, the lower deck was converted to road traffic as well.

The Tsing Ma Bridge is a bridge in Hong Kong. It is the world’s seventh-longest span suspension bridge. The bridge was named after two of the islands at its ends, namely Tsing Yi and Ma Wan. It has two decks and carries both road-rail traffic, which also makes it the largest suspension bridge of this type. The bridge has a main span of1,377 meters (4,518 ft) and a height of 206 meters (676 ft). The span is the largest of all bridges in the world carrying rail traffic. and

The41 meters (135 ft) wide bridge deck carries six lanes of automobile traffic, with three lanes in each direction. The lower level contains two rail tracks. There are also two sheltered carriageways on the lower deck for maintenance access and as backup for traffic when particularly severe typhoons strike Hong Kong. Though road traffic would need to be closed in that case, trains could still get through in either direction.

Richmond Bridge is a Grade I listed 18th-century stone arch bridge in southwest London, England, which crosses the River Thames at Richmond, connecting the two halves of the present-day London Borough of Richmond upon Thames. Because the river meanders from its general west to east direction, flowing from southeast to northwest in this part of London, what would otherwise be known as the north and south banks are often referred to as the “Middlesex” (Twickenham) and “Surrey” (Richmond)banks respectively, named after the historic counties to which each side once belonged.

The bridge was built between 1774 and 1777 to the designs of James Paine and Kenton Couse, as a replacement for a ferry crossing that connected Richmond town center on the east bank with its neighboring district of East Twickenham (St. Margarets) to the west. Its construction was privately funded by a tontine scheme, for which tolls were charged until 1859. The bridge was widened and slightly flattened in 1937–40, but otherwise still conforms to its original design. The eighth Thames bridge to be built in what is now Greater London, it is today the oldest surviving Thames bridge in London.

1 thought on “8 Most Beautiful Bridges in The World”