Hyperdiffusion of erythrocytes in capillaries 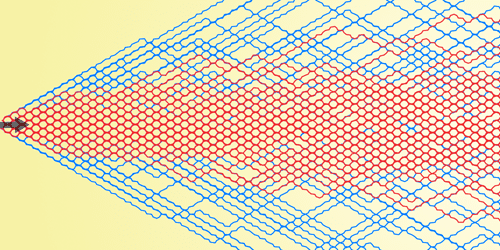 Blood follows the hydrodynamic equations as it flows through the blood vessels.

However, the blood vessels gradually bifurcate into finer vessels until they bifurcate into capillaries that are only a little larger than red blood cells, at this point the traditional hydrodynamic equations fail.

To describe the flow of blood in capillaries better, the researchers performed a numerical analysis of the particle system in the microchannel network.

They found that the diffusion rate of deformable irregular particles (e.g., red blood cells) in the lattice depends on the concentration and deformability of the particles.

A related paper was published in Physical Review Letters.

The researchers simulated a honeycomb lattice with irregularly shaped deformable particles that can choose between the upper and lower channels when they encounter a bifurcation in the mesh.

In a typical fluid, the particles are very small relative to the pipe, and the probability of each particle going up and down is independent of its choice in the previous level of bifurcation.

However, when the particle size is comparable to the width of the tube and the concentration is low (similar to red blood cells in capillaries), the particle will have a strong “memory effect” if it is hard.

If the particle is hard, then it will have a strong “memory effect”.

If a particle travels upward at a bifurcation, it is likely to continue traveling upward at the next bifurcation.

This effect causes the overall diffusion of the particle stream to be much faster than in the traditional case, which the researchers call “superdiffusion”.

Diseases such as sickle cell anemia and malaria can cause changes in red blood cell properties.

The researchers believe that this study may give us more insight into related diseases.

Staying healthy during the aging process