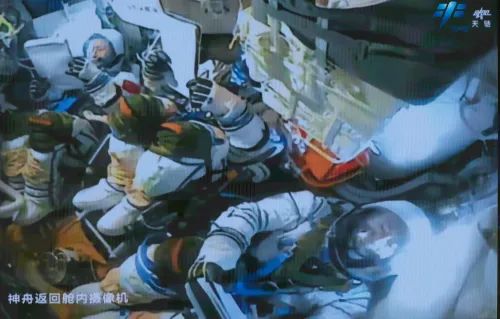 Chen Dong became the first Chinese astronaut to stay in orbit for more than 200 days.

The Shenzhou XIV manned spacecraft was launched from the Jiuquan Satellite Launch Center on June 5, 2022, and subsequently docked with the Tianhe core module to form a combined body.

The three astronauts conducted three exits during their six-month stay in orbit.

They completed the installation and debugging of equipment inside and outside the space station module and space application mission-related facilities and equipment.

They carried out a series of space science experiments and technology tests.

They welcomed in orbit the visits of two space station modules, one manned spacecraft and one cargo spacecraft.

They have completed the assembly and construction of the “T” basic configuration of the Chinese space station in cooperation with the ground.

They completed the first in-orbit handover with the Shenzhou 15 astronauts, witnessed the world record for the fastest rendezvous and docking of a cargo spacecraft with a space station, and many other historic moments.

They made use of the mission gap to conduct a “Tiangong classroom” space lectures, as well as a series of unique science education and cultural dissemination activities.