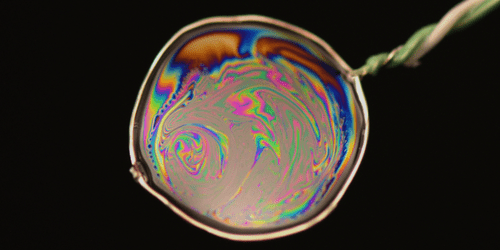 Bubbles are everywhere, from beer bubbles to bubble-blowing toys.

But physicists still have many unanswered questions about the behavior of bubbles, such as why some bubbles are less likely to burst than others.

In a recent article published in Physical Review Letters, scientists took a step toward solving this problem by discovering that the temperature of bubble films may be much lower than their surroundings.

In past studies, scientists have typically assumed that the temperature of bubble films is similar to the ambient temperature.

The scientists in this study prepared soap bubbles using a mixture made of dishwashing liquid, water and glycerin.

When they measured the temperature of the soap bubbles under various environmental conditions, they found that the temperature at the surface of the film could be up to 8°C lower than the surrounding air.

This is because the film is constantly evaporating the liquid, which causes the film to thin while also causing it to cool, and this plays a key role in the stability of the soap bubbles.

The results of this study could help foam industry manufacturers to better control the stability of their products.