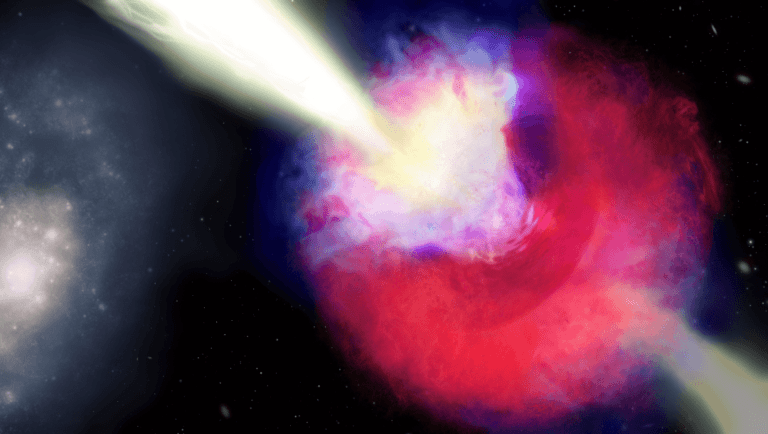 Long GRBs, on the other hand, are associated with supernovae – the collapse of massive stars.

However, in four recent papers published in Nature and one in Nature Astronomy, researchers have observed a “strange” GRB whose duration and presumed origin do not match these classifications.

Observations of this GRB suggest that it comes from the conjunction of two dense objects, such as neutron stars.

GRB 211211A comes from a galaxy 1.1 billion light-years away, and the duration of this bright outburst is about 1 minute.

Eleonora Troja and coworkers believe that this GRB was caused by a kilonova – an explosion that occurs after the collision of two dense objects.

Jillian Rastinejad and coworkers came to the same conclusion, suggesting that the complex light-change curve observed in GRB 211211A (but rarely seen in long GRBs associated with supernovae) may point to a merger event.

Binbin Zhang and coworkers point out that the GRB itself is too long in duration to be classified as a short GRB, and propose to explain the gamma-ray and kilonova emission in terms of a new predecessor object of this GRB.

Alessio Mei and coworkers reported high-energy gamma rays that started about 16 minutes after the GRB and lasted more than 5 hours, which they attributed to photons released by a kilonova.

Benjamin Gompertz and co-workers found that the high-energy emission from gamma-ray burst GRB 211211A is consistent with a scenario driven by a merger event.

They conducted a 5-minute observation of the event using multiple instruments at the Fermi Gamma-ray Space Telescope and the Graysless Rainbird Observatory and found that this high-energy radiation was produced by electrons moving near the speed of light.

According to one possible explanation, these relativistic electrons may have formed an outward flow under the acceleration of the “proto-magdas” created during the merger.