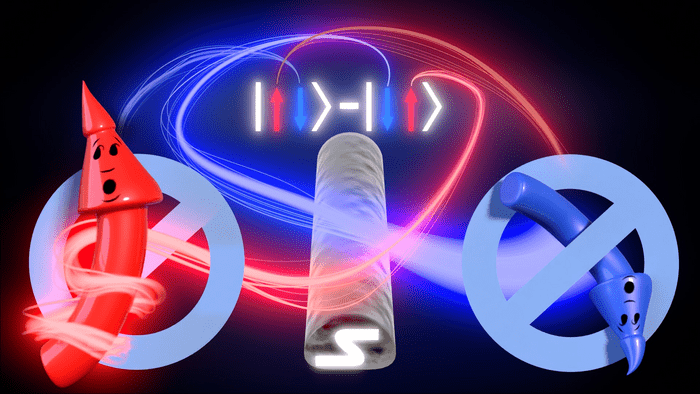 Electrons will only leave the superconductor in pairs

both with opposite spins (arrows up or down, corresponding to red or blue).

If the spin filter is set to parallel spin passage, then only electrons with spin down (blue) or spin up (red) can pass.

It is widely accepted in theory that electrons in superconductors do not move individually, but pair up as Cooper pairs with opposite spins.

However, this spin correlation has not been verified experimentally.

A recent article in Nature shows that scientists have for the first time experimentally verified that electrons always appear in pairs in superconductors and detected a negative correlation between the spins of electron pairs.

For years, scientists have been able to extract electron pairs from superconductors and spatially separate the two electrons through quantum dots – two nanoelectronic structures that are connected in parallel, due to the fact that each quantum dot allows only a single electron to pass through.

And in this study, the scientists combined nanomagnets with quantum dots to make spin filters.

Since the spin determines the magnetic moment of the electron, the nanomagnet creates a tunable magnetic field in the quantum dot so that only electrons with a specific spin can pass through it.

The results show that if a spin-up electron passes through one of the quantum dots, then a spin-down electron will pass through the other quantum dot, and vice versa