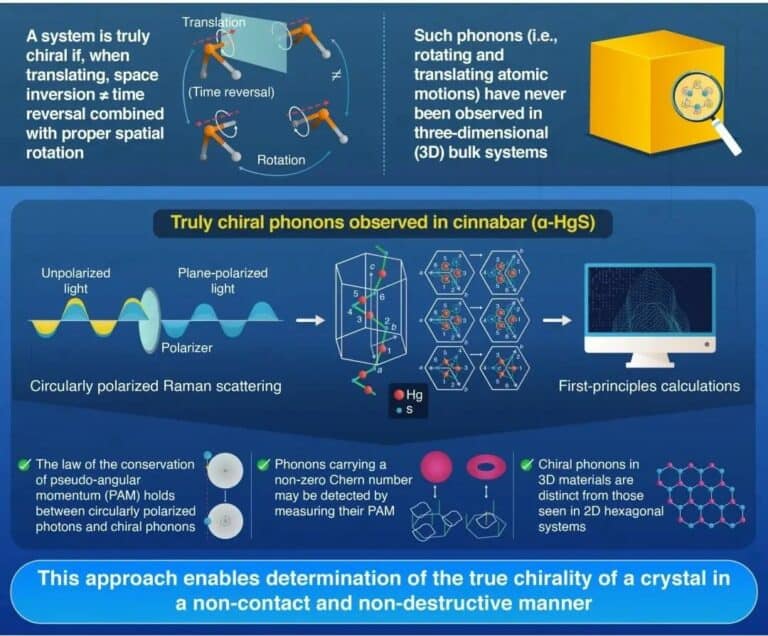 Chirality is a manifestation of the inherent asymmetry in nature, and in addition to static chirality, dynamic processes including rotation may also lead to the appearance of chirality.

Therefore if a spatial inversion operation is performed on a system that is not equivalent to the combination of a temporal inversion with an appropriate spatial rotation operation, then the system can be judged to be one with true chirality.

Phonons are energy quanta associated with atomic vibrations in a lattice, and chiral phonons with inverse symmetry breaking have nonzero angular momentum, but the phonons previously observed by scientists in the two-dimensional material Se₂W are not true chiral, although they have a chiral character, i.e., rotating but not propagating atomic motions.

Scientists always want to find true chiral phonons in three-dimensional materials that both rotate and propagate.

Recently, a study published in Nature Physics shows that researchers have identified phonons with true chirality in three-dimensional materials for the first time, both theoretically and experimentally.

Since circularly polarized light is also chiral, it is most appropriate to use chiral techniques to detect chiral phonons with pseudo-angular momentum (PAM).

Among them, the PAM and pseudo-momentum of phonons are derived from the phase factors obtained by rotational symmetry operation and discrete translational operation, respectively.

With the help of a novel experimental approach, the researchers found that the PAM conservation law applies between circularly polarized photons and chiral phonons.

This work provides an optical method to identify the spin-orientation of chiral materials with PAM, which not only has a higher resolution than that achievable by X-ray diffraction (XRD), but also avoids the invasive and destructive nature of XRD on the material.