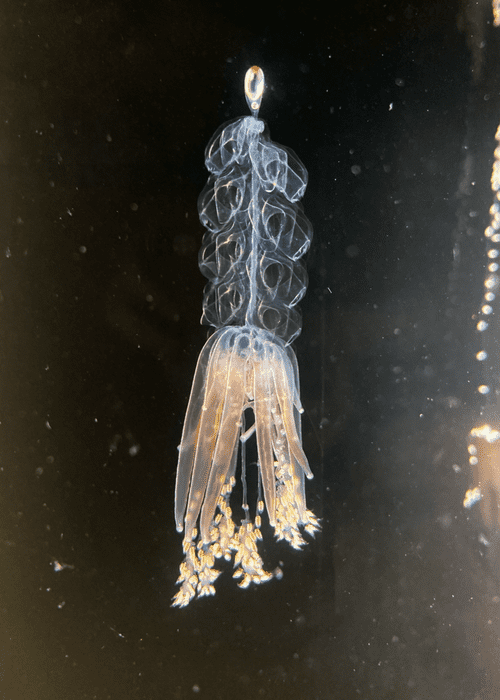 The Nanomia bijuga is a marine creature of the order tube-jellyfish, with a dozen jet-like soft structures that propel its body forward by draining backwards.

At the same time, it can control each “jet” individually, making them eject either synchronously or asynchronously (in sequence).

A recent study published in the Proceedings of the National Academy of Sciences (PNAS) shows that the combination of two different jets allows the double jellyfish to move at maximum speed or optimal energy consumption as needed, crossing the barrier that most organisms cannot combine explosive power and endurance in locomotion.

The researchers used video recordings and computer models to analyze the advantages of the double small jellyfish movement pattern.

The study shows that, compared to other marine organisms that rely on jets to move, the double small jellyfish has multiple distributed propulsion units

The evolutionary advantage of the twin jellyfish lies in controlling the timing of the jets’ operation.

Synchronous jetting enables it to move at high speeds, ideal for rapid escape from predators.

Asynchronous jetting, on the other hand, reduces the speed of movement but is more stable and energy efficient, allowing the twin jellyfish to move hundreds of meters per day, making it more suitable for everyday use.

This research provides a framework for developing multifunctional robots, such as underwater vehicles that can be set up with multiple thrusters to move at high speed or efficiently by controlling their propulsion timing.