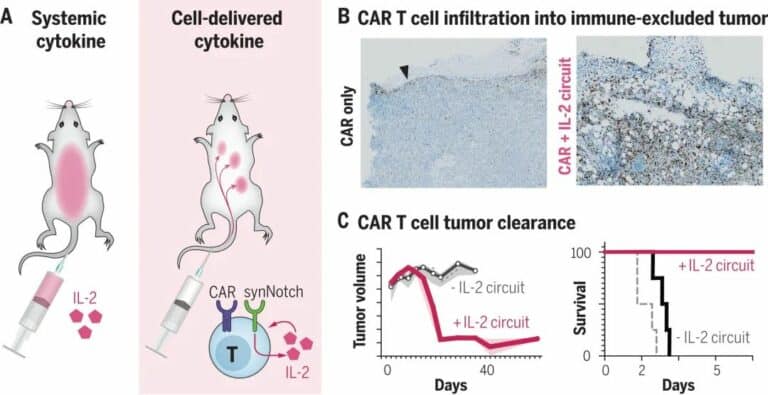 T cells are important immune weapons in the body.

However, many tumors can build up a defense barrier to block T-cell attacks.

Interleukin 2 (IL-2), a molecule that enhances T-cell activity, has also been seen as a way to fight tumors for a long time, but systemic IL-2 treatment has often caused serious adverse effects.

A recent study published in the journal Science showed that T cells modified by scientists were able to produce large doses of IL-2, but only when they entered tumors: such T cells shrunk solid tumors in a mouse model without producing strong side effects.

Existing CAR-T therapies have given T cells receptors that recognize tumor antigens and can treat some cancers, but the environment created by solid tumors can still limit the effectiveness of such therapies.

Now, the team has added a second synthetic receptor to T cells that can recognize tumor antigens and prompt T cells to secrete IL-2 to fight tumors.

This receptor, which scientists opened the body a few years ago called synNotch, is a molecular sensor emitted that spans the inner and outer cell membranes and is externally responsible for recognizing and binding to tumor cells, triggering the interior to initiate IL-2 production.

Researchers tested the efficacy of synNotch receptor-containing T cells in a variety of deadly tumors, including melanoma and pancreatic cancer.

They were found to be effective in treating solid tumors with no serious adverse effects.

The scientists say the treatment works because a controlled circuit of amplified immune responses is engineered into the cells, allowing the cells to produce IL-2 only under specific conditions and keeping the process.

This process is controlled within the tumor so that other sites do not receive damage.