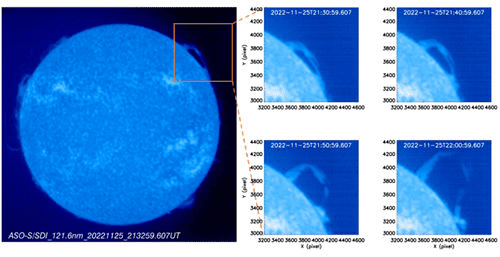 According to the official website of the National Space Science Center of the Chinese Academy of Sciences, a press conference on the first batch of scientific images of China’s comprehensive solar exploration satellite “KuaFu-1” was held in Beijing on the morning of December 13.

It has acquired several images of scientific observations of the Sun.

Previously, the first image launch of HXI was held on Nov. 21.

And at the latest launch, the scientists concerned said that FMG has achieved the first solar magnetic field observation in space in China.

The quality of the obtained local longitudinal magnetic map of the Sun has reached the international advanced level.

In addition, LST has three sub-payloads.

Among them is the Solar Sun Surface Imager (SDI), which realizes the first international acquisition of Lyman alpha-band full solar surface image on a satellite platform.

It provides a clear and complete image of the evolution of the heliopause.

A further sub-payload is the Solar Coronagraph Instrument (SCI).

As it is turned on, it will carry out observations of coronal mass ejections.

In the next phase, Quaife 1 will continue to carry out and complete in-orbit tests according to the established plan.

The next phase will be the early transition to the in-orbit science operation phase. (National Space Science Center, Chinese Academy of Sciences)