Rungrado May Day Stadium The Biggest Stadium In The World

The Rungnado May First Stadium, or May Day Stadium, is a monumental stadium in Pyongyang, North Korea completed on May 1, 1989. Rungrado May Day Stadium has 150 000 seats and a total floor space … 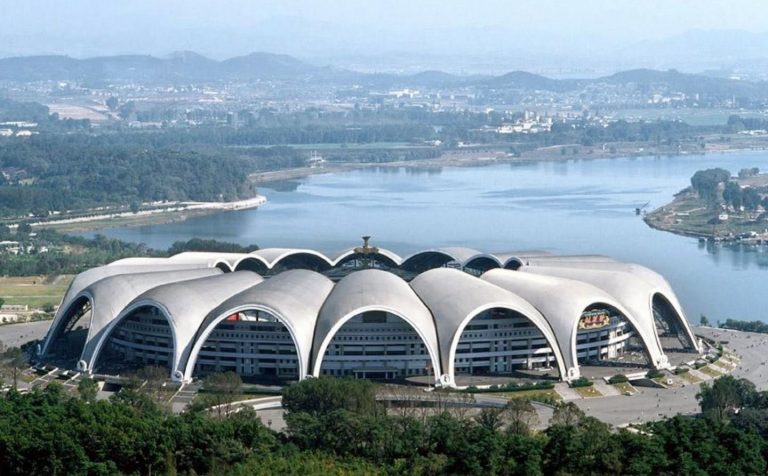 The Rungnado May First Stadium, or May Day Stadium, is a monumental stadium in Pyongyang, North Korea completed on May 1, 1989. Rungrado May Day Stadium has 150 000 seats and a total floor space of more than 207 000 square meters. The area of the pitches is over 22 500 square meters. The stadium has eight stories and is more than 60 meters high from the ground to the roof. The 60-meter long canopy is enough to cover the section of the stands. The pent of the inner roof is 60 meters long and the outer roof 40m long. The 16 arch roofs link with one another like flower petals. 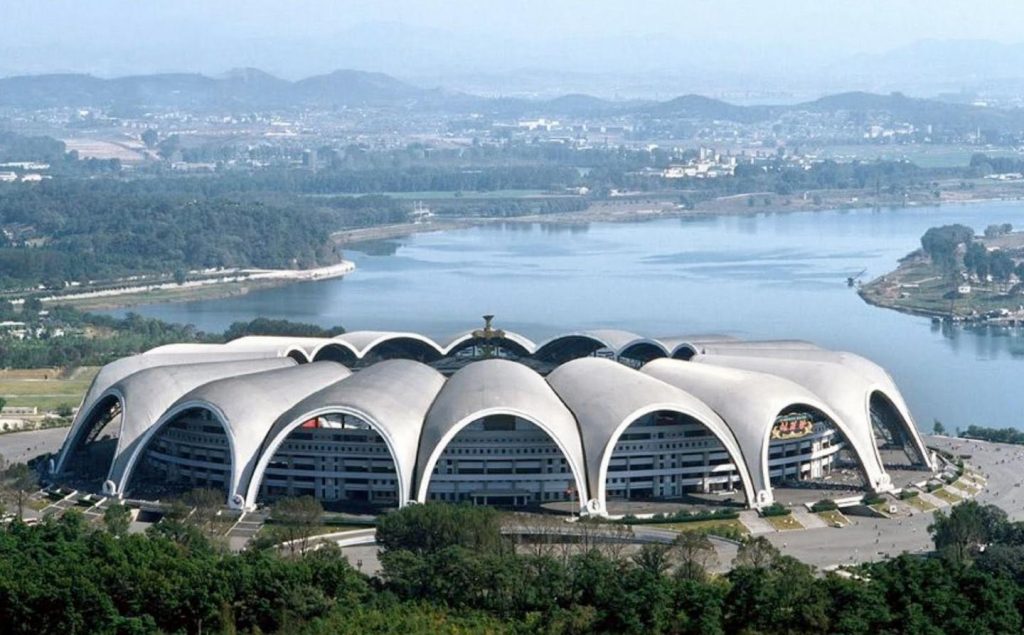 The roofs look like a large flower floating on the clear water of the Taedong, or a parachute that has just landed, so it gives the impression of a dynamic sculpture. The stadium has 80 exits and ten lifts. It was built in two and a half years on the picturesque Rungra Island in the Taedong River and commissioned on May 1, 1989. Every condition is provided for international games. The football pitch is covered with natural grass, and the 400-meter track and other parts for field events are rubberized.

The stadium has various training halls, recreation rooms, an indoor swimming pool, an ultrasonic bath, a sauna, beds, and so on, which are indispensable for the players’ training and convenience. It also has dining rooms, a broadcasting room, and telex booths. The rubberized indoor running track is several hundred meters long and is on the sixth floor.

The impressive Rungrado May Day Stadium, which is found in the metropolis of Pyongyang in North Korea, has a capacity of 150,000 people. This means that each citizen of Salamanca (Spain) could fit upon this stadium. It’s used both as a football field as well as for different athletics events.

Its name comes from a mixture of where it is located: Between the Rungra island and the Taedong River. The May Day part is because of the social impact that the well-known Labor Day has in socialist countries such as North Korea.

The Reungrado stadium is the state field for the national North Korean team. Despite being truly the Democratic Republic and hardly having any connection with the rest of the world, the national team is affiliated to FIFA. In 1987, Prime Minister Kim Il-Sung decided to start out building the stadium.

Its construction lasted a total of two and a half years, being the final opening on May 1st, 1989. It has a complete area of ​​207 km2 and a capacity of 150,000 people. That means that it’s able to seat 50% more spectators than Camp Nou, FC Barcelona’s stadium, which is the major stadium in Europe. This infinity of seats is divided into 8 different floors that can be as long as 60 meters in height. In addition, it has a 60 meters long pavilion to cover all sections.

Regarding construction features, the roof bow 16 is joined so that it looks like flower petals, like one type which can be within the same river Taedong, making dynamic, original, and impressive sculpture.

Its excellent facilities and natural grass meet all necessary and indispensable to experiment with matches and to host major worldwide events. As though its architectural structure and ability weren’t enough features, also provides training halls, indoor pool, saunas, beds, dining … to give the best service to any player or professional athlete.

It currently hosts all the games of the Korean team, some athletic competitions, and the Arirang Festival twelve-monthly festival, which features a large number of professional gymnasts and is visited by 12 million people during the 2 months even though the festival lasts.

Living Your Life in Green Color